In the first six months of 2018, at least 78 women — and likely more — have been killed in acts of violence.

A report released by the Canadian Femicide Observatory for Justice and Accountability complied a list of such cases from across the country.

The July report explained that while the list of 78 cases was compiled to the best of the organization’s ability, there are likely limitations.

Some cases may have flown under the radar, especially those involving Indigenous women in remote communities, the report said. 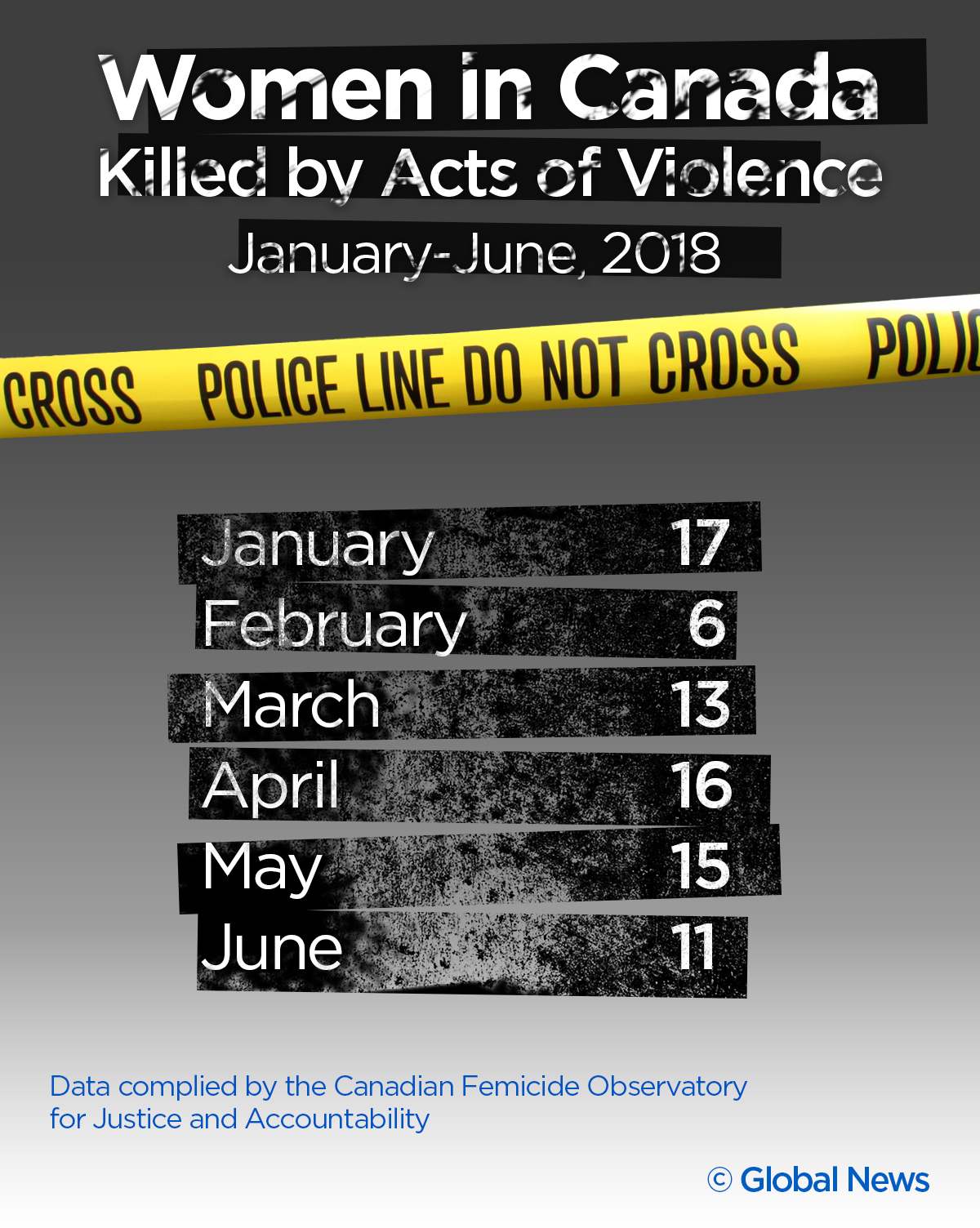 In other instances, violence may have been suspected in a death, but more conclusive evidence is needed. Sometimes those cases take years to investigate.

Paulette Senior, CEO of the Canadian Women’s Foundation, told Global News that the uncertainty surrounding how many women really died is concerning in itself.

“The fact that we can’t even be sure about the number speaks to the fact that it’s much more complex and deeper ,” she said.

The organization added that it defines femicide as “the killing of all women and girls primarily, but not exclusively, by men.”

That means the cases included in the report could include violence against women perpetrated by individuals other than men.

Lee-Ann Lee, who heads the Assaulted Women’s Helpline’s board of directors, explained that there are many terms used to describe violence women face.

READ MORE: The role entitlement, rejection can play in misogyny and violence against women

There’s domestic violence, intimate-partner violence, femicide, violence against women, and others that all mean slightly different things and should be used carefully.

Lee said she prefers using the term violence against women, which most accurately hones in on the fact that these individuals are being targeted because of their gender.

“These women are experiencing violence simply because they are women. Violence against women is rooted in inequality, because we are seen as less than men.” she said.

WATCH: Indigenous women 12 times more likely to be murdered than other women

Who are the victims?

The victims of femicide reported by the organization came from across Canada — with a range of backgrounds and ethnicity.

Some of the deaths were widely reported by the media, such as the women who were killed in the April 23 Toronto van attack. The suspect in that attack — Alek Minassian — had posted online praising the so-called “incel” movement.

WATCH: These are the victims of the Toronto van attack

Incel, or “involuntarily celibate,” is a misogynist online culture of men who don’t have access to sex and believe it’s a basic human right.

Other cases in the report largely flew under the radar, and limited information is available about the victims and their deaths.

There are several reasons why that’s especially true for Indigenous women, Lee explained, including a lack of media coverage.

READ MORE: 5 Ontario women have allegedly been killed by men in their lives in January

“I think the biggest culprit in terms of not reporting is that Indigenous women don’t see the police as an ally in ending the violence in their lives,” she said.

Senior added that issues of systemic racism and marginalization of certain communities play a significant role.

“On some of the farthest margins of society are Indigenous women.”

A look at the statistics

According to Statistics Canada, 148 women were victims of homicide in 2016. There is no data available yet for 2017.

The homicide rate for Indigenous women was down 31 per cent in 2016 from the previous year with 12 fewer deaths, according to Stats Canada.

That means 78 deaths in six months is not out of the norm.

“It’s not different,” Lee said. “It is so predictable that women are going to die at the hands of their abusive partners.”

She noted that it may seem shocking or higher to some because there has been more awareness of the problem with social movements such as #MeToo and #TimesUp, which focus on empowering women to speak out about abuse.

Barriers to getting help

“Information should be accessible in terms of language, where the information is stored, and in terms of having support to walk them through the very complex systems,” she said.

Senior added that organizations put a lot of effort into making this happen, but it’s often not enough because they face budget constraints.

“When you’re looking at women in remote, northern parts of our country, it’s much more pronounced for them in terms of their ability to access support,” she explained, noting they face transportation barriers and often a lack of nearby social services.

If you or someone you know is in crisis and needs help, resources are available. In case of an emergency, please call 911. For mental health programs and services around Canada, please refer to the list here.