A slim majority of Canadians are fine with returning to the office amid the COVID-19 pandemic, but they’re not ready to send their children back to school just yet, a new poll suggests.

READ MORE:
Can we really keep kids distant in school amid COVID-19? It won’t be easy, experts say

The Ipsos survey found that 52 per cent of respondents in Canada would be OK with going back to their workplaces, but just 22 per cent would be comfortable allowing their kids to return to the classroom.

After being under lockdown since March, people are more willing to take some chances at this stage.

“I think part of it is people now have a bit more experience with what the pandemic is about,” he said. “And for the working-age population, it’s not as big a threat, at least in terms of mortality, as it is for seniors.”

Comfort levels were much lower with school because there are a lot more unknowns for parents in terms of how children can — or will — adhere to preventive measures such as social distancing and hand-washing, Bricker said.

In Quebec, by far the hardest-hit province, parents were more likely than Canadians elsewhere to be OK with kids returning to school, at 31 per cent.

The survey results come as provinces take tentative steps towards returning to everyday living. The novel coronavirus pandemic has claimed more than 6,300 lives in Canada, though new case counts have been falling in many areas since the beginning of the month. So far, some classrooms in Quebec and B.C. have reopened, though attendance is not mandatory.

Attitudes on getting back to normal were not consistent across Canada, the poll found.

There could be a few different reasons why that is, Bricker said. Past research shows men tend to take more risks, and women could be more concerned about personal safety and following medical advice. 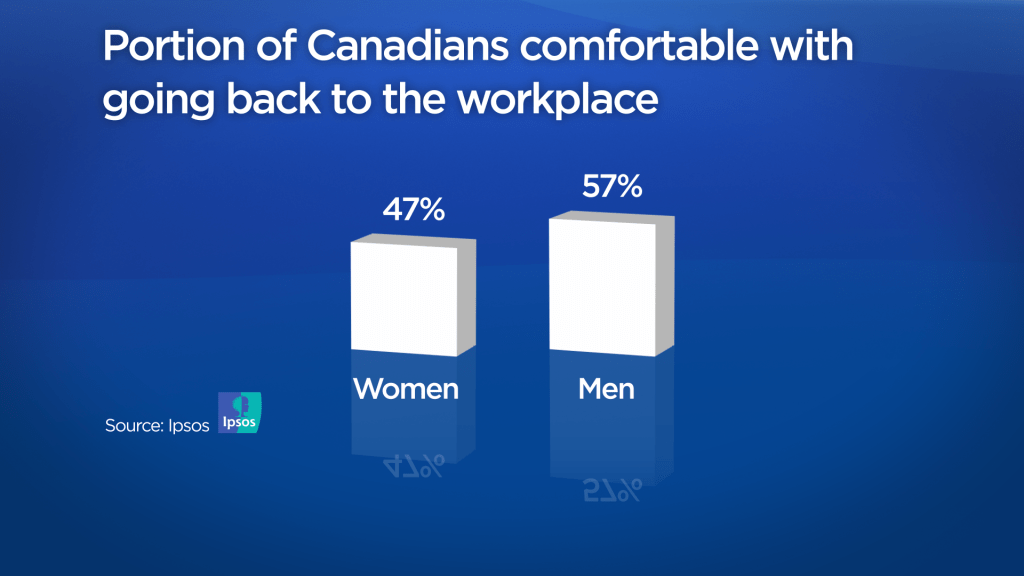 “But then the other aspect of that is a lot of women have responsibility for primary childcare in their houses,” Bricker said. “So it might be more difficult for them than their partners to go back to work.”

The online survey was conducted between May 7 and 10, and residents of 16 countries were polled.

Despite the United States being the world’s No. 1 hotspot for the virus — with a death toll approaching 100,000 — Americans are roughly on par with Canadians when it comes to their comfort levels in returning to work, at 55 per cent.

Like Canadians, about one in two people in India, Japan, Mexico, the U.K. and South Africa were comfortable going back to work. More than three-quarters of South Koreans and Australians also said they were fine with it. 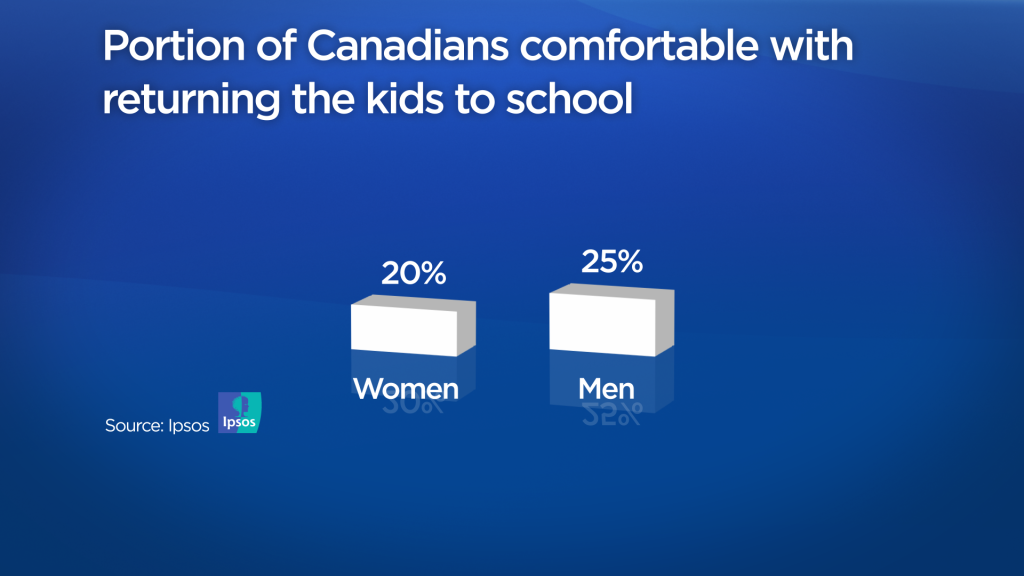 Brazilians were least likely to feel ready to go back to work (32 per cent) or return their children to school (15 per cent). The country has the third-highest number of infections in the world, behind the U.S. and Russia, at nearly 331,000 cases.

READ MORE: Can you visit family and friends? Here’s a breakdown of the rules by province

In the countries polled, the level of comfort with returning to normal seems to hinge on two factors — how long ago the outbreak started, and how devastating it has been, Bricker said.

“When you take a look at countries that have had more severe outbreaks, they’re also more reluctant to participate,” Bricker said.

These are the results of an Ipsos survey conducted May 7 to 10, 2020, on the Global Advisor online platform among 16,000 adults aged 18-74 in Canada and the United States and 16-74 in Australia, Brazil, China, France, Germany, Italy, Spain, India, Japan, Mexico, Russia, South Africa, South Korea and the United Kingdom. The sample for this study consists of approximately 1,000 individuals in each country. The samples in Australia, Canada, France, Germany, Italy, Spain, Japan, South Korea, the U.K. and the U.S. can be taken as representative of these countries’ general adult population over age 16 or 18 (as above) and under the age of 75. The precision of Ipsos online polls are calculated using a credibility interval with a poll of 1,000 accurate to plus or minus 3.5 percentage points.